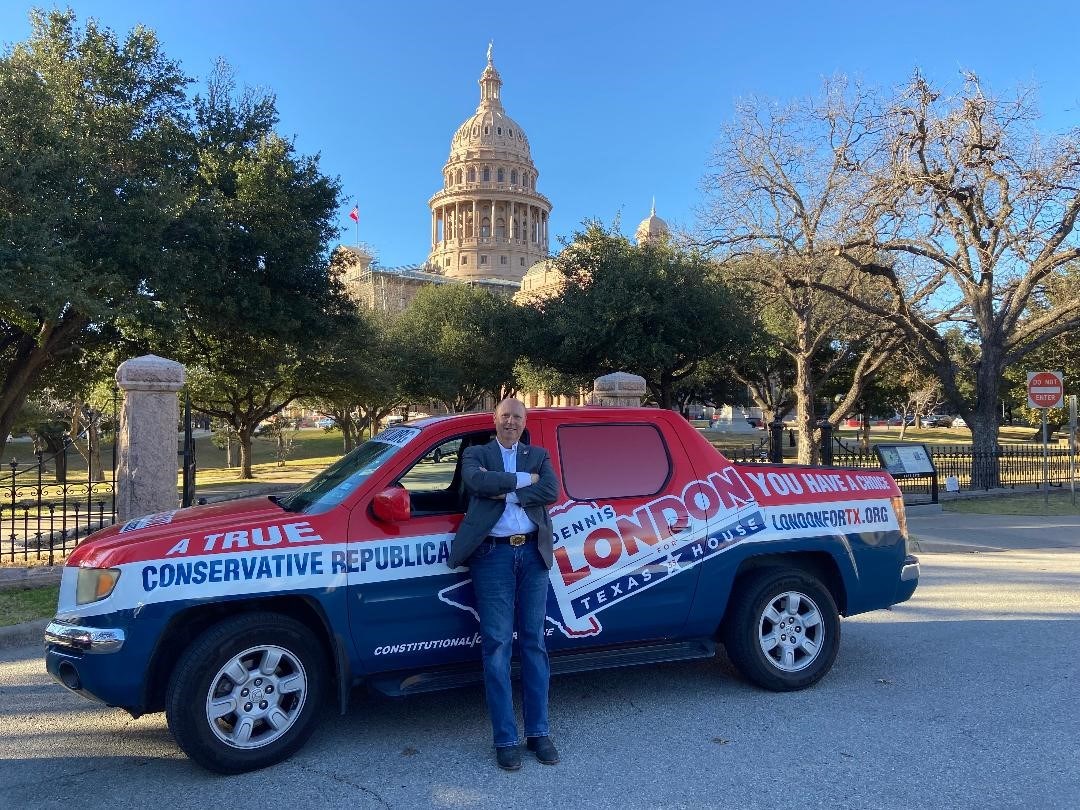 Austin, TX — January 14, 2023 — Standing in front of the Capitol last Thursday, Dennis London announced the launch of his campaign for State Representative in House District 33, encompassing Rockwall and parts of Collin County, for the March 2024 Primary.

Hundreds of Republicans from all over Texas traveled to Austin this week to remind the legislature that 81% of Republican primary voters disapproved of their Republican Speaker handing power to the Democrats by appointing them to powerful committee chair positions.  Most arrived on Thursday, anticipating the house rules would be taken up that day, though the newly re-elected Speaker moved the debate on the calendar for Wednesday instead.

Wanting to witness the start of the session, London and his wife arrived in the capitol on Tuesday, so they were present in the gallery as the drama unfolded on Wednesday.  They watched as every attempt to amend the House rules to end the practice of minority party committee chairmanships was shut down by not only Democrats but also Republicans who called points of order on the proposed amendments, effectively blocking any discussion or vote on the subject.

The practice of elected Republicans handing power to the opposition party makes no sense to London.  “I ask you, if you were a football coach, would you head out before the game and ask your opponent’s defensive coordinator to run your offensive line?  That’s exactly what our Speaker does when he lets Democrats chair committees.  These chairs have the power to decide whether a bill ever makes it out of committee and onto the floor for a vote. If we want to move the ball down the field, and that’s our Republican legislative priorities, why are we handing them our playbook?”

London also pointed out a contrast between the House Speaker election in Washington D.C., and the one just held in the Texas Capitol.  In Washington, McCarthy had zero Democrat votes.  In Austin, every Democrat voted for Speaker Phelan. “And why wouldn’t they? They know he is going to share power with them” said London.

“If we want to understand why this is happening, we need to look in the mirror. We are the ones voting for the ‘R’ behind a name but not keeping track of how our elected officials represent us. We continue sending the same people back to Austin while expecting different results”.  The solution? “Be a candidate who vows to support Republican priorities – or support one who does.  Primaries are the opportunity to draft new talent that will yield more wins for the team.  In District 33, I am that candidate”.