It's our civic duty to vote for our elected leaders, but our duty does not end there.

We must also hold them accountable.  It's not enough to vote for the "R" -we must also look to see what they are actually doing on our behalf.  When I looked, I wasn't happy with what I saw. 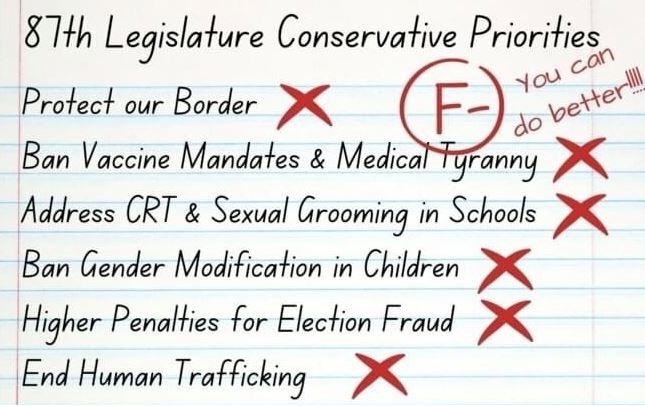 You would think that a Republican-led legislature (since 2002) would be getting the job done with our Republican Legislative Priorities.

Yes, some good is getting done, like the Heartbeat bill, partial Constitutional Carry, and banning biological men from women's sports. But it has taken massive political pressure to accomplish.  WHY? When we've had a Republican majority for the last 2 decades?

We can and must demand BETTER.  But to do that, you need to know where your lawmakers stand.  Here's a guide we've compiled to help any Texan look up their lawmaker. Go ahead, take a look and see if your State Representative and Senator are part of the problem, or part of the solution.

I hope this guide has given you some good tools to quickly find out how well your elected officials are representing you. If your officials are doing great, that's awesome! Go vote for them!  If not, vet their challengers using the resources above. Think of Primary season like scouting, before we draft in November.  Would you draft without scouting first?

Bottom line - Texas needs MORE conservatives in Austin. If you already have one - consider supporting a Conservative candidate in another district (like right here!).  Donate, volunteer, campaign! And keep Texas Conservative!

Thank you for signing up!

What has your Texas Legislature done about School Choice?